Making Good on Your Climate Commitments: How a Community Dashboard Can Help

To this day one of the best taglines I’ve seen is “Local Action Moves the World.” That’s from ICLEI-Local Governments for Sustainability where I was the US Services Director from 2005-2009 and had the pleasure of working with hundreds of local governments across the nation. That line reflects the reality on the ground for a myriad of issues where progress is stymied at the national and international levels. None more so than climate change. 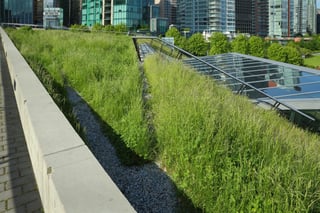 Local governments across the globe -- from the megacities to tiny villages -- have been reducing climate pollution and advancing sustainability for decades. Long before it was mainstream or part of a trending hashtag like #WeAreStillIn or a movement like the push for cities to transition to 100% renewable energy, local governments were quietly yet boldly pushing forward solutions that eventually were adopted by more communities and their counterparts at the state, national and international levels and in board rooms and at universities.

And for most of this time, that local action has happened in a complete vacuum.

For what felt like a nanosecond, we basked in the glory of having the weight of the US government behind us with President Obama’s Clean Power Plan and the Paris Climate Agreement.

Today the federal government might be moving in reverse, but cities and counties 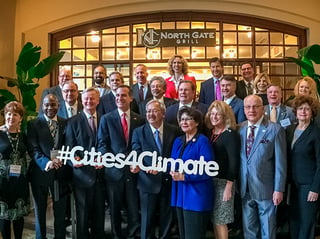 aren’t taking their foot off the electric-powered pedal. Local government leaders are taking their own steps -- from signing on to pledges to pushing forward with Climate Action Plans to embracing renewable energy -- that, taken together, represent potentially game-changing emissions reductions.

But for sub-national entities to really carry the weight of greenhouse gas reductions, you can’t just set ambitious commitments. Nope, this requires following through with bold action.

Two of the primary vehicles for local climate commitments today -- and thus a significant source of hope for our efforts to fight climate change -- are the Global Covenant of Mayors for Climate and Energy (formerly the Compact of Mayors) and Climate Mayors (aka the Mayors National Climate Action Agenda). Let’s break them down:

Global Covenant of Mayors for Climate and Energy

governments with a shared long-term vision of promoting and supporting voluntary action to combat climate change and move to a low emission, resilient society.  Cities and towns that were originally part of the Compact of Mayors, have committed to a series of requirements within three years of their initial pledge, including:

Cities that joined the Covenant as of January 1, 2017, will need to “establish a target...for GHG emissions reductions, make a commitment to tackle climate change adaptation and resilience, and increased access to clean and affordable energy.”

In addition, “cities and local governments will have to report progress against established commitments on a regular basis.”

So this isn’t just a signature, press release, photo opportunity and then let it fade away. These are real commitments with real expectations. It’s also not a small group of cities or just the “usual suspects.” The list of Covenant cities is impressive.

While there are no binding commitments for Climate Mayors members, cities are 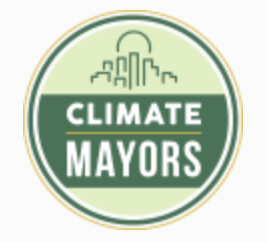 expected to pursue an emissions reduction target by:

Binding or non-binding, when you sign on to a pledge of this nature your name (the local elected official’s name and the community’s name) is now on record. You’ve made a public commitment on one of the most critical issues of our time. And, chances are, your community is watching and waiting. Waiting for your actions and for a chance to do their part.

And THAT is where a Community Dashboard comes into play.

You need your community members to:

1) know what goals have been set for the community

2) be aware of what actions are in the works, where you’ve met with success and what challenges remain and

Key factors to keep in mind: 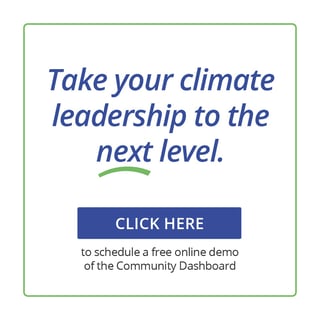 We created the KLA Community Dashboard with those factors in mind. It is a communication platform that turns your data into stories and those stories into impact. It has mechanisms to continuously engage community members in a way that inspires individual action. It allows you to track and report progress toward your goals and share successes.

Our Climate Leadership Dashboard Package wraps this all up for you. It includes 12 climate-focused data sets, tools for tracking and publicizing progress, and support services.

“Local Promises Move the World” isn’t nearly as compelling or as true as “Local Action Moves the World.” Want to find out how the KLA Community Dashboard and our Climate Leadership package can turn your promises into action?