Spring break time is upon us! Ah, the sun, the fun… and whether you are a college student looking to party on the beach or a family with kids heading to Disney, about 25 million of us will be heading to the Sunshine State of Florida during the months of March and April. Florida’s warm weather is a welcome change from the winter weather in much of the rest of the country and for $1,000 per plane ticket (gulp) or a scenic drive down I-95 there really is no better time to go. Maybe money doesn’t matter if this is a family tradition, right? You’ve been doing this since the kids were in elementary school and before you know it they will head off on their college spring break to Florida. In another 25 years, they will take their families to Florida for spring break and keep the tradition alive.

With warming temperatures and rising sea levels, Florida is ground zero for climate change. Will Florida actually be a desirable destination for your grandchildren?

The current Governor has allegedly banned the use of the terms “climate change” and “global warming” in official correspondence, and whether true or not it is certainly representative of his administration’s approach to the problem. Nevertheless, many counties and cities in Florida are taking aggressive action to ensure your grandkids and great grandkids have a Florida worth visiting.

There are three ways to address climate change: 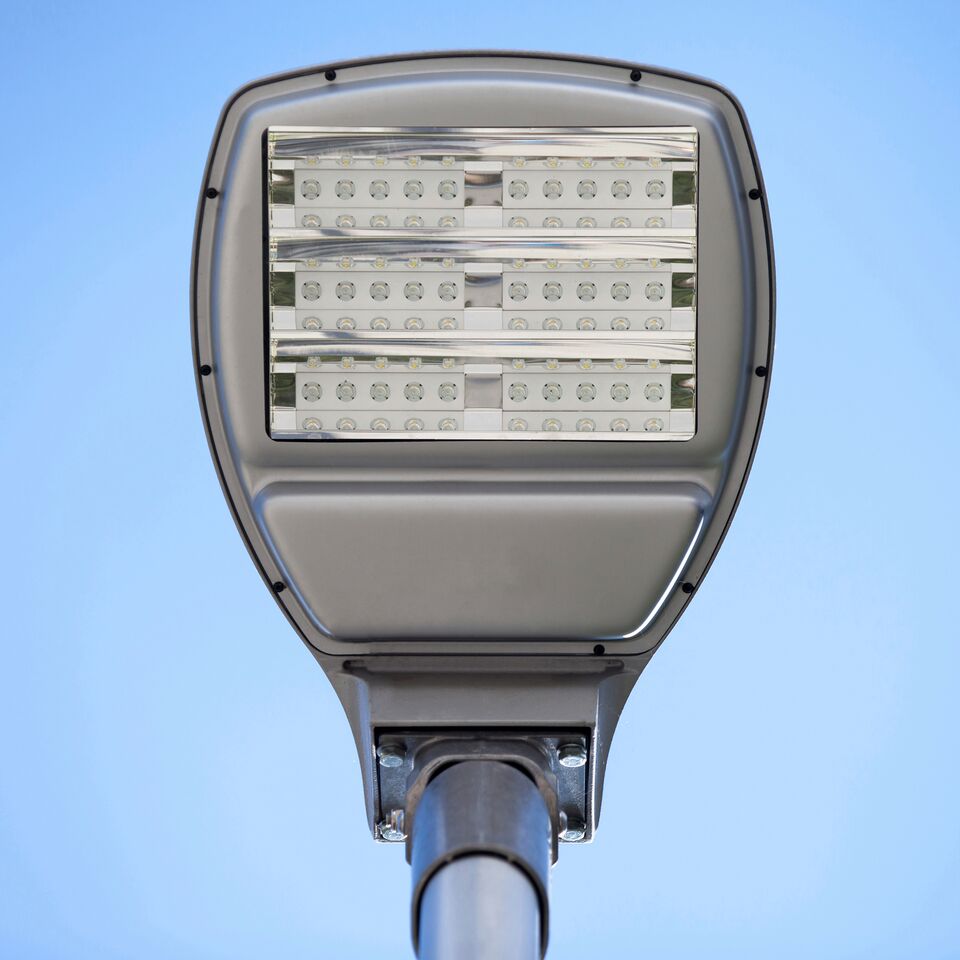 Cities and counties throughout Florida have been very active in assessing and taking action to reduce greenhouse gas (GHG) emissions. In fact, some Florida counties (Miami-Dade, Orange) have been engaged in GHG reduction or mitigation programs for more than two decades.

The City of Orlando, through its Greenworks Orlando program, established a goal of obtaining 50% of electricity from clean, renewable sources by 2040. In 2011, the Orlando Utilities Commission installed the first solar farm in Orange County. The 5.9-Megawatt solar photovoltaic (PV) array will generate enough renewable energy to power more than 600 homes.

The City of West Palm Beach was the first city in Florida to commit to the Department of Energy’s Better Building Challenge and through this commitment reduced energy use by 20% six years ahead of their target year. This goal was achieved through a significant investment of $6.8 million in an energy performance contract that retrofit a number of their municipal facilities and replaced 7,000 streetlights with light emitting diodes (LEDs).

Adapting to a Changing Climate 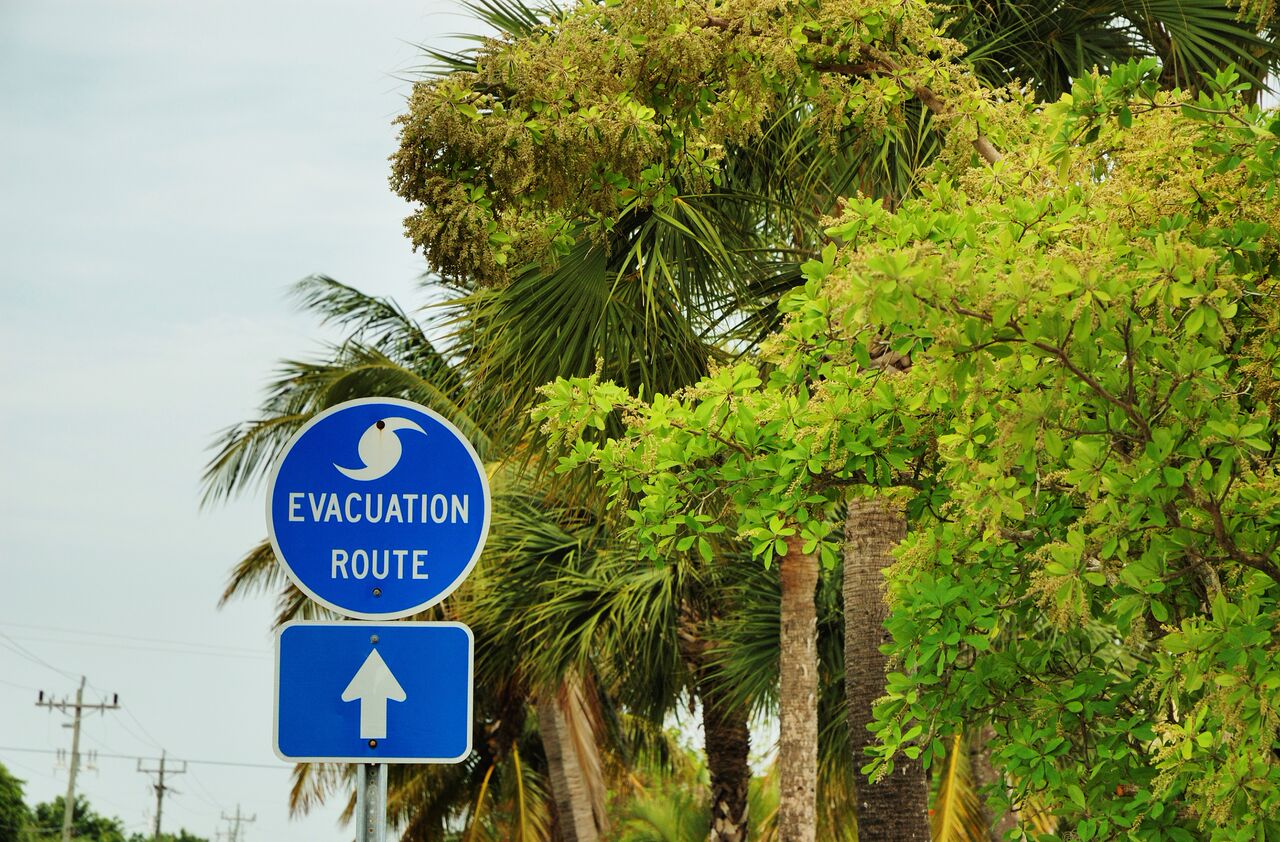 In 2009, the four counties that make up Southeast Florida (Palm Beach, Broward, Miami-Dade, and Monroe) formalized the Southeast Florida Climate Compact, which outlines the collaborative effort among the counties to foster sustainability and climate resilience at a regional scale. In 2011, this group released the Unified Sea Level Rise Projection for Southeast Florida, with the goal that each county and the municipalities within each would use these projections for appropriate planning purposes. The 2015 update of these projections indicates sea level rise of 6 to 10 inches by 2030 and up to 57 inches by 2100. To put this in perspective, the average elevation in Miami is six feet (72 inches) and I am only 62 inches tall. While it might seem like the significant rise is off into the future, the reality is that juts a few inches of sea level rise has a real impact during storm events and high tides. 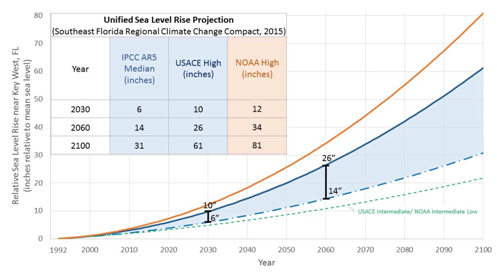 In addition to collecting and applying key scientific data, the Compact and its participants are actively implementing projects that will help increase their resilience to sea level rise and other impacts of climate change.

The City of Miami Beach’s current mayor ran an ad during his campaign where he was commuting to and from work in a kayak. This worked! He has been Mayor since 2013. One of his first acts as Mayor was to initiate a project to install electric pumps in key flooding areas within the city that would pump the water from the roads into Biscayne Bay. This $400 million project has so far been successful at keeping the roads dry even during the king tides that occur in March and October. Developers within Miami Beach are taking note and many new buildings are designed with ground level “washout floors,” which are essentially open areas that allow water to flow in and out without compromising the value or structural integrity of the building.

What can you do?

While the future is never certain, these local governments are stepping up and taking action to combat the significant challenges facing Florida’s future. So what can you do while you’re there on spring break to help ensure Florida’s future? Here are some ideas:

Enjoy your time in the Sunshine State! Maybe I will see you there!