Orlando and the Pursuit of a Smart City

Smart cities. Everyone wants to live in one. Plenty of cities are trying to become one.

A new survey by the National League of Cities found that 66% of cities are investing in smart city technology, and 25% without any systems in place are trying to figure out how to implement it.

So what is a smart city and what does it take to get there? To answer those questions, I went straight to the source: Chris Castro, Sustainability Director for the City of Orlando. He’s been called the “guru of green” by the Orlando Business Journal and one of the “Grist 50” , a list of emerging leaders. If you're on Twitter, follow him.

Chris joined us for our SAS Talk with Kim podcast series to talk about smart cities, and he had so much to share that we split the podcasts into two parts.

In Part 1 we talk about how smart cities integrate with what's already happening in cities with sustainability and the challenges that local governments face in this realm. In Part 2 we dive into the issues of equity and access to new technologies, the importance of strong leadership, opportunities with public-private and university partnerships, the imperative of tracking progress and the delicate balance of privacy, security and transparency.

Chris cut his teeth in the startup world but is quick to note that his current employment at a local government is no mistake. He sees cities as the “beacon of hope” on sustainability issues, the place where the rubber meets the road and a “petri dish for innovation and creativity.”

At the end of the day no city wants to be what he calls a rotary phone in a digital age.

“Nexus Between Sustainability and Technology”

Where cities start and finish, Chris says, will mean different things to different cities. For Orlando he boils it down to “the nexus between sustainability and technology.” In Orlando they strive to “use information and communications technologies to enhance livability, workability and sustainability” -- hitting on the ideas of quality of life and competing for high wage jobs and top talent. When you get past the vision to the nuts and bolts, Chris says smart cities is working in at the same verticals as sustainability:

He mentioned that their current update of the Green Works strategy (I was lucky enough to be part of developing that Community Action Planas a consultant) is basically layering in smart cities. They are calling it Smart ORL, but it has not entailed adding anything totally new -- a lot of it is coordinating work among departments. That’s good news for cities with resource constraints who don’t have the luxury of starting a whole new initiative. You can check out the latest on Orlando’s smart cities initiatives here. 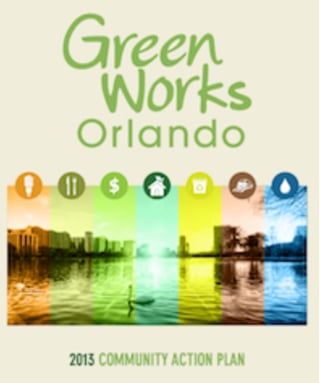 Does that mean it’s going to be a cakewalk? Not by a long stretch, but Orlando has one huge advantage: strong leadership and support of Mayor Buddy Dyer. The charge is to integrate the “smart cities” ethos into the culture of the local government and the community. In our podcast, Chris talks about how invaluable that support has been and the many forms it takes.

Another key to Orlando’s success has been partnerships. It’s definitely worth hearing Chris talk about the Metro Lab Network (which is open to any city so check it out -- and you can follow them on Twitter @MetroLabNetwork). It fosters city-university partnerships to research, develop and deploy projects addressing urban challenges. That has led to collaboration with the University of Central Florida on autonomous vehicles, which in turn led to the formation of the Central Florida Automated Vehicle Partnership which was designated by the U.S. Department of Transportation as an Automated Vehicle Proving Ground earlier this year (just one of 10 designees out of a pool of 60 applicants).

Side note: Orlando was also selected earlier this year by the Smart Cities Council to be part of the Smart City Council Readiness Challenge (one of five cities selected out of more than 100 applicants).

Challenges. And How to Overcome Them.

Chris framed out some challenges cities face on their road to the “smart” label:

Our conversation was a good reminder that smart cities go way beyond energy use and sustainability. Chris said they are finalizing their framework for tracking progress right now but that KPIs include things like travel time and crime rates and resource efficiency.

As someone on the front lines of the smart cities movement, I asked Chris what he sees as the next big thing. His response: Smart street lights, which he calls the “gateway drug” to smart cities. Instead of just lighting a street at night, smart street lights can provide a host of additional services around the clock, including: monitoring air quality, gunshot detection, extreme weather alerts, wifi connection and more.

For Orlando there is another largely untapped market: tourism. The City’s population is roughly 300,000, but it hosts 68 million visitors every year -- the most visited city in the country. They are working with tourism partners to ensure that Orlando can showcase to visitors from around the world what a smart city looks like, lessons they can apply after they’ve visited Disney World or been to a conference at the Orange County Convention Center.

I loved everything Chris had to say in our podcast -- we chatted so extensively that we broke it up into two parts for your listening pleasure -- but perhaps my favorite line came as Chris was explaining how he and his team were able to accomplish so much. He said that sustainability is “who I am, not what I do.” I imagine a lot of us are in the same boat, driven by our passion for sustainable, livable communities -- smart cities.

Be sure to take a listen to our chat with Chris (Part 1 and Part 2).