Podcast with John Trujillo on Their Outside-the-Box Approach

Cities of all shapes and sizes are dealing with the challenges of projected growth. Do we have enough housing? Do we have the right infrastructure and transportation options in place? And how will deal with all that extra waste?

With 1.6 million people, Phoenix is the 5th largest city in the country. It is also the fastest-growing, adding 88 people a day in 2015-2016 and a population expected to double by 2050.  The city represents ⅔ of Arizona’s population and generates more than 1 million tons of trash, requiring solid waste trucks to drive 7 million miles a year. And they decided that the status quo for waste disposal – from landfill to recycling to composting -- was simply not sustainable.

Their answer has been an approach known as “The Circular Economy,” and I recently talked with John Trujillo who was with Phoenix’s Public Works Department for 15 years before stepping down as Director in May.

You can listen to the SAS Talk with Kim podcast with John here, and I’ve included a very abbreviated set of notes from that chat below. I also recommend taking a few minutes to watch a short video the city produced. 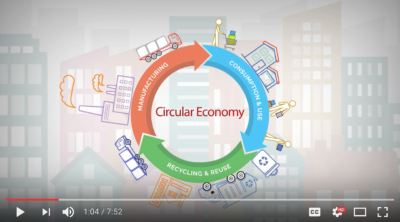 Circular Economy 101
Phoenix didn’t start off saying “We need to be a circular city.” The city was several years into a Reimagine Phoenix roadmap process that kicked off in 2013 and keenly aware that it had a reputation as one of the least sustainable cities in the country with a dismal waste diversion rate of 16%. The new goal of 40% waste diversion by 2020 and zero waste by 2050 was, to say the least, ambitious.

But it quickly becomes more palatable when viewed through the circular economy lens of “take-make-use-recycle/repurpose” vs. the traditional “take-make-use-dispose.”

GreenBiz.com has a good primer on The Circular Economy concept: “A circular economy is designed to feed back into itself: A product of long-lasting quality is placed into the market; the byproducts from its manufacturing are repurposed; and the retired product is reused as much as it possibly can. This rebuilds capital and enhances the flow of goods and services, while bringing a manufacturer as close as possible to a zero-waste goal”

The circular economy has roots in the Cradle to Cradle™ concept and certification process, a “framework [that] focuses on design for effectiveness in terms of products with positive impact and reducing the negative impacts of commerce through efficiency.

John did a Q&A with Cities Today last year that talks about the Phoenix circular economy approach, and it’s a short and easy read if you want to whet your appetite for our podcast. Fortune Magazine also covered it back in 2015. Green Living Arizona offers a quick tour of some of the companies contributing to Phoenix’s circular economy.

John echoed something I’ve been hearing in lots of recent podcast discussions with local government folks: breaking down internal silos and finding ways to collaborate among departments is critical. John is in Public Works, but that department can’t do it alone. For example, they needed help with business development so they went to Economic Development. Eventually the Public Works Department funded a staff position to be housed in Economic Development. John and I addressed this topic during a session at the 2016 American Planning Association’s National Planning Conference in Phoenix.

But the external collaboration with the private sector was just as important and has become a hallmark of Phoenix’s circular economy.

They have a partnership with nearby Arizona State University called the Resource Innovation and Solutions Network that convenes and facilitates collaboration with multiple stakeholders to drive innovative approaches to and economic opportunities with solid waste diversion.

Speaking of innovation, Phoenix switched up the typical RFI process and called it a CFI or “Call for Innovation.” They got several proposals from local companies, including:

As John said, “We don’t just drive trash to the landfill, now it’s driving the economy.” 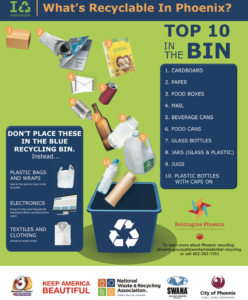 Of course, the headlines and accolades for Phoenix’s circular economy were hard earned. John emphasized that key people within the City must have open minds to new approaches, take the time and effort to understand local resources and opportunities, and be willing to take some calculated risks.

Is your city up to the task? Before you answer that question, take a listen to my talk with John -- I think you’ll be inspired!