“I was elected to represent the citizens of Pittsburgh, not Paris.” With those words in June 2017 President Trump announced his intentions to pull the U.S. out of the Paris climate accord -- and thrust Pittsburgh into the spotlight.

It was like he “missed the last 30 years” of Pittsburgh’s story, the city’s Chief Resilience

Officer Grant Ervin told me recently on my SAS Talk with Kim podcast.

You can listen to our full conversation here.

Indeed, Pittsburgh has undergone a major transformation from an industry town dominated by the steel industry (the city lost 40% of its population between 1970 and 2006 with the collapse of the steel industry) to a medical hub and leader in technology --- and, it turns out, climate and sustainability action.

So to many of us it wasn’t a surprise when the President’s words were followed by those of Pittsburgh Mayor Bill Peduto and Paris Mayor Anne Hidalgo in a joint New York Times op-ed:

“Last week, President Donald Trump tried to pit our two cities against each other when 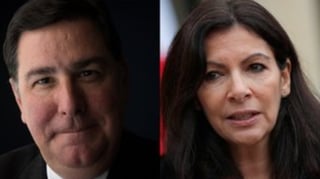 he announced, in pulling out of the Paris Agreement on Climate Change, “I was elected to represent the citizens of Pittsburgh, not Paris.” As the mayors of Pittsburgh and Paris, we’re here to say that we’re more united than ever. Though separated by an ocean and a language, we share a desire to do what is best for our citizens and our planet. That means putting aside parochial politics and embracing the global challenge of fighting climate change. In doing so, we can create a cleaner, healthier, more prosperous world for Parisians, Pittsburghers and everyone else on the planet.”

The best part about Mayor Peduto and the City of Pittsburgh is that those aren’t just words. More than a decade ago, the Mayor, when he was a City Councilor, sponsored a

program to allow ICLEI (and me!) to come in and help the City develop their first greenhouse gas emissions inventory and climate action plan. Since then, the City has become a leader in green buildings; moved forward with LED street lights; pursued urban farming initiatives; utilized an inclusive process to engage all members of their community on a dialogue around resilience; implemented district energy initiatives -- including the Pittsburgh 2030 District which now has 438 high performing buildings at its core; been designated a Solar America City; and pledged to slash GHG emissions 20% by 2023 and transition to 100% renewable energy by 2035.

I was in Pittsburgh in October for Al Gore’s Climate Reality Project Leadership Corps Training (you can read about that in my blog post, and NEXTpittsburgh covered some of the Pittsburgh residents who were with me at that training) and saw some of their sustainability prowess in action.

Pittsburgh on the International Stage

Their action and the President’s words were why Pittsburgh was front and center at the international climate conference known as COP23 in Bonn, Germany in November. Grant joined the Mayor for the trip, and we talk about that experience on the podcast.

One of Mayor Peduto’s tweets (@billpeduto) from Bonn summed it up this way: "If 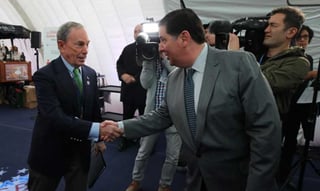 you're waiting for the mills to come back or the mines to be open, you'll be living in the past - you'll never be a part of the future. In Pittsburgh, our message is: join us."

Grant notes that one of the reasons cities are such an invaluable voice on the international stage is that they bring none of the baggage -- war, trade disputes, etc. -- to the table the way nations do. That’s at the core of the new Urban Transitions Alliance (UTA) (led by my former employer ICLEI-Local Governments for Sustainability) which helps cities around the world with an industrial legacy, transition to a sustainable future. The UTA just launched at COP23 and brings together cities from China, Germany and the United States. Grant talked in detail about the alliance during our chat (you can listen to that here).

At a time when you hear about competition and discord at the international level particularly between the U.S. and China, it’s refreshing to instead hear stories of collaboration and shared goals and vision. The UTA summarized the launch this way:

“Through lively dialogue between the Alliance, striking similarities emerged despite their differences in terms of region, culture and history. Stories arose from on the ground examples such as restoring air quality from industrial impacts, polluted rivers revived for swimming, creative brownfield redevelopments and technological innovations. Still one connecting factor stood out clearly: Having faced environmental, economic and social crises, industrial legacy cities are champions in reinventing themselves and turning challenges into opportunities. The Urban Transitions Alliance will be guided by their joint vision of well-managed transitions towards a sustainable future, which centers on a healthy environment and just opportunities for their citizens.”

In many ways Pittsburgh is the classic story for that transition from industrial legacy to sustainable future.

The Climate Reality Project did a great job of summarizing how Pittsburgh -- where in the 1940s “the air was so heavy with soot and smog and smoke that the city’s streetlamps remained lit 24 hours a day -- weathered the fall of the steel industry and closure of coal mines (which led to a staggering unemployment rate in the 1980s), “spent the last three decades remaking their city into a multi-industry hub for education, healthcare, technology, and sustainable development,” and where the City is headed. You can read it here. 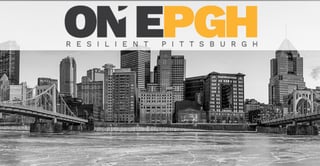 More evidence of Pittsburgh’s determination to rebuild in a more resilient, sustainable fashion can be found in their OnePGH strategy, developed over the course of years and centered around four values: People, Place, Planet and Performance. Here’s how they break down those values:

People: Pittsburgh will empower all residents to contribute to thriving and supportive communities by ensuring that basic needs are met. We will be an inclusive city of innovation that celebrates our diversity, and all residents will have equal access to resources and opportunity

Place: Pittsburgh will use land to benefit all residents; to increase social cohesion, connectivity, public and ecological health; and to protect against current and future risks. We will design, scale, and maintain our infrastructure for current and future needs, providing benefits and services to our neighborhoods during times of calm and crisis

Planet: Pittsburgh will achieve long-term environmental health through wise stewardship, improved use of our resources, and a reduced carbon footprint

Performance: Pittsburgh will work closely with neighbors and partners for improved planning and decision-making

“Building resilience through the power of neighbors”

When we chatted, Grant emphasized how the “connection to place” drives so much of what they do. Reading about their OnePGH approach you see phrases like “building resilience through the power of neighbors” and “working together is the Pittsburgh way.” Pittsburgh is comprised of 90 distinct neighborhoods each with their own identity, separated by hills, valleys, and rivers. He said that regardless of the amount of new technology and modernization, it still always comes back to the people and the places we call home.

We talked about place in the context of community engagement, for which he offered two lessons: “There is never enough, and we’re never done.” Well said.

He also made the point that these days we need distributed community engagement to match the nature of today’s distributed media. People don’t just rely on the 5 o’clock news anymore, and by the same token you can’t just offer one community meeting. In our chat you’ll hear him talk about Pittsburgh’s work with other community partners and their forays into “deliberative forums” where small groups are talking together at tables, sharing ideas and building consensus. On previous SAS Talk podcasts we’ve talked about new approaches to community engagement -- you can hear Dan Guilbeault from Washington, DC, talk about their volunteer Sustainability Ambassadors program and Emie Michaud Weinstock talk about unique and engaging community event formats.

And how is Pittsburgh doing? I laughed when Grant said he had to Google “KPIs” after his boss mentioned it at a meeting when he was first working at the city. We’ve all been there. With more and more local governments adopting a business mindset and being held accountable for progress, “Key Performance Indicators” are just as much a local government term as a business term these days.

When I asked Grant to recommend three things for other cities that have helped him, KPIs made the list:

You can check out their full State of Sustainability 2016-2017 report here or their Resilience Strategy here (Pittsburgh is part of the elite 100 Resilient Cities initiative by the Rockefeller Foundation).

But first I would suggest you listen to my chat with Grant.